What is Abstinence-Based Addiction Treatment 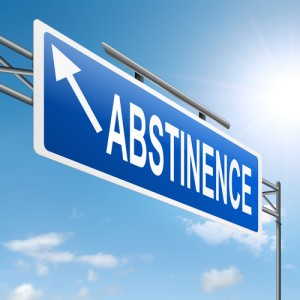 Abstinence is an old world which has been part of our language for hundreds of years. Its roots are in the Latin language, where it meant to abstain. Its meaning has changed little down through the centuries. Now, as it did then, it means to refrain from indulging an appetite; or indulging in some action, or some substance. It is often used in reference to alcohol and drugs, and the act or practice of not using them.

Abstinence-based treatment for addiction encompasses the basic concepts of the 12-step meetings of Alcoholics Anonymous (AA), a faith-based treatment program which has been successfully helping alcoholics since the 1930’s.

The abstinence-based treatment model was first known as the Hazelden or Willmar model, due to the fact it was developed at Minnesota-based Hazelen Treatment Center and Willmar State Hospital. Later, in the 1970’s, it become known simply as the Minnesota model.

Abstinence-based treatment focuses on an individualized treatment plan, involvement of the family, and making frequent use of the group meetings such as those common to Alcoholics Anonymous, Narcotics Anonymous, and Al Anon.

Inherent in the abstinence-based model of addiction treatment and its success is faith in a Higher Power, a spiritual awakening at some personal level, and faith in the power of being a part of the recovery community.

Many if not most who experience abstinence-based treatment seek to replace their self-defeating behavior with honesty, gratitude, forgiveness and humility.

There is currently a dangerous trend away from abstinence-based treatment, according to a recent online article on Science 2.0.

The article details that an abstinence-based recovery model considers addicts sober if they refrain from the use of recreational mind-altering substances. While some minor exceptions may be made for valid short-term painkiller use, it is suggested that addicts live a life which does not include taking substances for non-medical purposes. Nor does an abstinence-based recovery model include taking psychoactive (affecting the mind) substances.

The Betty Ford and Hazelden treatment centers, longtime proponents of abstinence-based treatment, recently embraced harm-reduction as a form of treatment. Harm-reduction is medical-based, and uses pharmaceutical drugs like Suboxone, methadone or other drugs in an effort to mitigate the “harm” of substance abuse.

Harm-reduction is an attempt, as well, to keep the person using a pharmaceutical drug as a substitute for the user’s drug-of-choice. A smaller and less frequently-used amount of the pharmaceutical, but enough to ward-off getting dope sick, is used.

The bottom-line on harm-reduction is that is replaces one drug with another drug, and it does not achieve abstinence nor sobriety. The addict is not restored to a life without chemical dependence, nor is the underlying cause he or she turned to drugs addressed and resolved.

Living a drug-free life after addiction, free from chemical dependency, is possible. Seek out a treatment program that is abstinence-based, and takes a holistic and life-changing approach to overcoming addiction.